Many people often ask me how we got involved helping Syrian children in Lebanon.  Many years ago I watched on 60 minutes parents and their children dying from chemical weapons.  I was not prepared how awful this was.  Sometimes people don’t like when I share such awful things, but we can’t turn our eyes away from the evils of this world, especially as a Christian.  God has called us to be a light to those suffering and in need of Christ.  I was devastated watching this.  To see a parent suffering from the effects of the chemicals, and yet trying to reach over to their child to help them and being uncapable was probably one of the most shocking heartbreaks I have ever seen. Both parents and 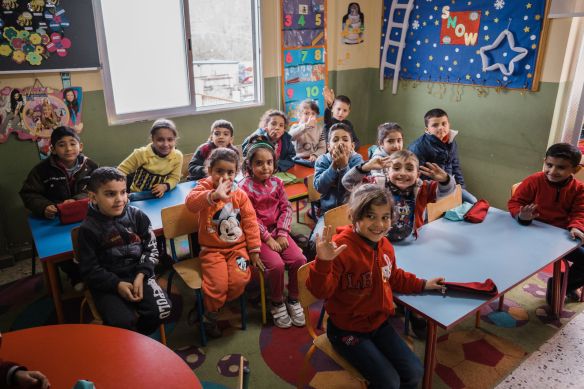 children watched each other take their last breaths.   A few years ago, I also saw the exodus of many Syrians leaving their homeland, because Isis was threatening to kill them if they didn’t do what they demanded.  In their efforts to escape harm in their country, many children lost their parents, grandparents and sadly siblings.  I can’t imagine losing your whole family, leaving your home and everything you know.  God was drawing me in to do something.

A friend told me about a man at my church who was sending containers of food and supplies to the Syrian refugees living in tent camps over the Beqaa mountains in Lebanon just over the border of Syria.  He said, we could have thousands of nonprofits help and we will never be able to help all of them.  I called “Heart for Lebanon”, a nonprofit working directly onsite and Chris told me that she felt in many ways God had led these people out of Syria to hear the gospel for the first time which is what they do.  They share the gospel with the people living in tents.  They also feed over 2,500 families there and have over 300 children in the school they provided.  They have a mobile church on wheels that drives around throughout sections of this huge tent camp doing church services so Syrians that had to flee are given new hope.  I wanted in.  After all I had read and seen, I knew God didn’t want me to turn a blind eye to this.  Families that live in the tents are asked to take in the orphans that have nowhere to go, because their family was killed either by Asaad’s regime, the President of Syria or Isis members.  These are some of the children we have been able to provide monthly packaged food packs to. It is encouraging to see these smiling faces as they get to learn again which they missed so much when they fled their country to safety.  Thank you to our sponsors who help feed these kids.  “Do not neglect to show hospitality to strangers, for by this some have entertained angels without even knowing it.” Hebrews 13:2